(Being the contrarian that I am, I still refuse to call it the now-used “K-Pg” Boundary except in scientific publications where it is required. It’s been KT since I was a kid, and it will be KT till I die. The letters started off as an abbreviation for two slices of geologic time, but they also became a proper name during the process. Correct and amend the terminology all you want to, but the proper name still sticks.)

Today’s task: recon. My student-assistants get their feet wet from the very beginning, with a long, long hike into unexplored territory. They learned a lot about reading the obscure geologic clues, ended their day a whole lot smarter than when they started off- we located a great new KT exposure at an undocumented site (can’t mention exactly where yet, but it is on private deeded ranchland and the spot is annoyingly difficult to clamber up to).

The greenish-grey mudstone toward the bottom is a rooted gley paleosol (paleo ground surface), and the orange-tan stripe on top of it is the KT impactite- the layer of fallout that came down after the Chicxulub asteroid impact. It is composed entirely of material blasted out of the Yucatan and the now-fragmented asteroid, that’s why it looks so different from the typical Hell Creek sediments. Above that, the black carbonaceous material is from a swampy pond. We each got to touch that miniscule ejecta layer, that tiny vestige that signifies an event that brought an end to the Mesozoic and the dinosaurs’ reign on earth. What a powerful connection to the past. 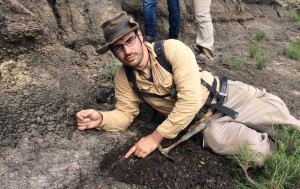 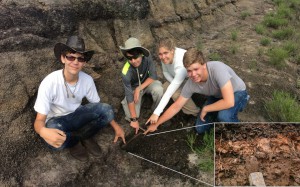 — with Karyn Chiapella and 3 others.

This entry was posted in Paleontology. Bookmark the permalink.